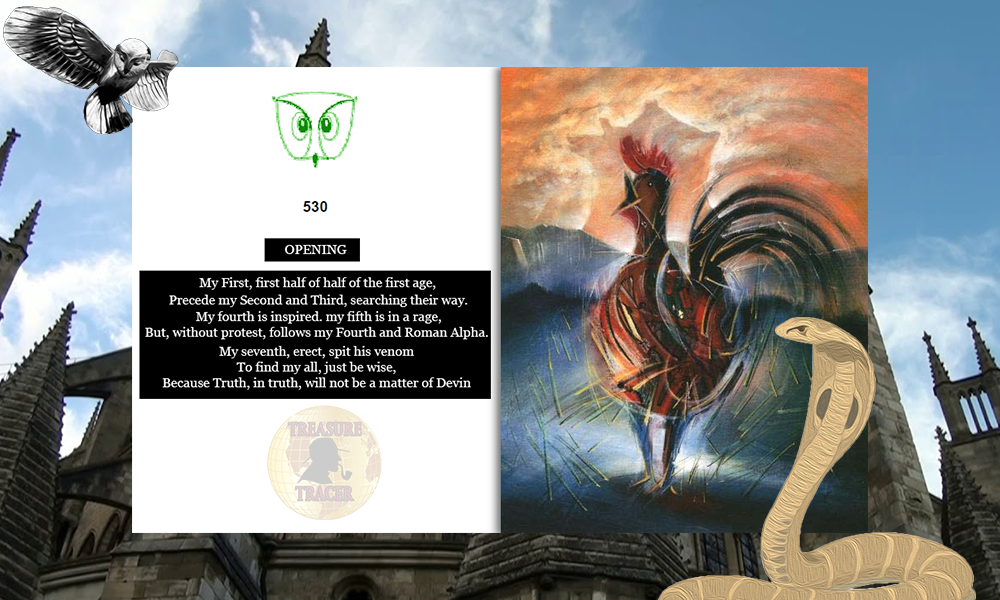 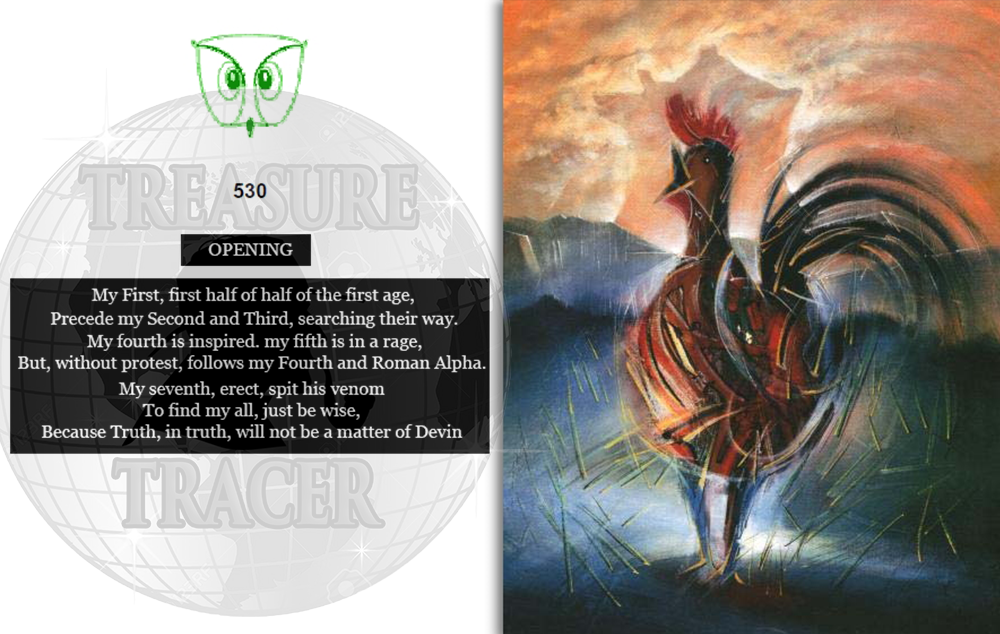 The first clue gave us the order and the second clue is believed to tell us where to begin.  We start with the commonly accepted solution. Clue 2 is written as if the word we are searching for is speaking. “My” is in reference to the word.

Precedes my Second and Third, seeking their way.

My Fourth is inspired, my Fifth is in rage,

Air is said to be inspired.  When air enters the lungs, this is called inspiration=R

But, without protest, follows my Fourth and the roman alpha.

The letter in “rage” follows the 4th letter, R, and the Roman Alpha A=G

My Sixth is hidden at the limits of ETERNITY.

The end of eternity but hidden. ETERNIT”E”=E

My Seventh, standing, spits his venom.

A letter that resembles a snake standing=S

To find my all, just to be wise,
Because the Truth, in truth, will not be a Devin’s affair.

The last two lines, are not used.

The commonly accepted answer to this clue is where to start, Bourges, France.

I am always the most skeptical in the beginning.  After all, if we do not start in the right place, we will waste a whole lot of time.  As we move forward, I do not want to continually second guess and interpretation several steps back.  So lets look at what we can take from this clue confidently:

• It would only make sense after learning the order of the clues, we get a place to start.

• Given the illustration is a symbol of France and an outline of France is in the background, a city would make sense.

• It is clear the clue is for us to use letters to spell the city.

Bourges seems to make sense.  But lets not jump to the easy answer too quickly. Lets take a second to look at it objectively. The R and G do not follow the same pattern we use to find the other letters.  While we could reverse engineer these two after the letters, its work mentioning.  While nothing suggests we need to anagram the letters once we have them, its still a possibility.

Max Valentine said the capitalization of words does not matter, except for the word ETERNITY.  The word doesn’t just start capitalized, it is all caps.  Is this a factor now or will it play in later?

The 90% rule is a good rule of thumb for treasure hunting.  We will never know anything as a 100% fact.  So we need to work a clue until it has a 90% chance of being correct.  Then we can move to the next step.  Bourges being the answer to this clue seems probable.  So we will move on but remember what we were objective to.

We know there is a strong probability of a “Super Solution” we will need at the end.  This tells us to keep an eye out for remaining information.

In this clue the words,”To find my all, just to be wise, Because the Truth, in truth, will not be a Devin’s affair,” is not needed to reach the answer Bourges.  There are several short clues so logic says it has meaning.

As we go through the clues, we will highlight the information not needed and put them in our bag.  We will carry this bag with us on each clue adding to it hoping it will help us as we progress.

What’s in the Bag?

Clue 1: To find my all, just to be wise,
Because the Truth, in truth, will not be a Devin’s affair.