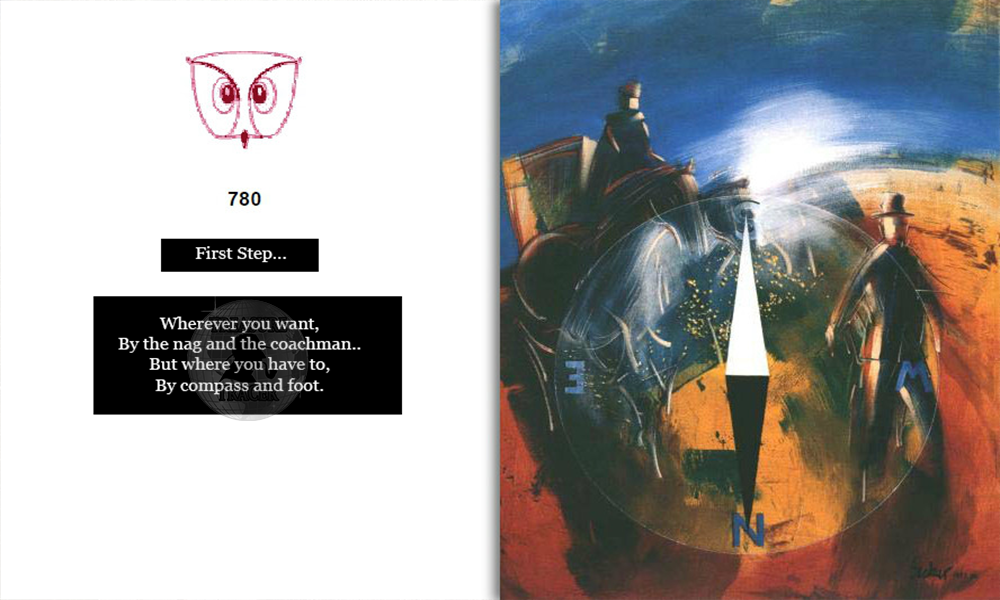 After learning the order of the clues and where to begin, Clue 3 (780 Enigma) gives us our first instruction, “First Step.”  The illustration shows a horse and carriage heading north, and a pedestrian heading south.  The clue insinuates we will want to go north but will need to head south.

Given there are only 19 total words in the text, it would seem much of the information we need is in the illustration.  However, it is important to remember Michel Becker, the artist for all the paintings, was never given the answers to the enigmas.  He was only told a general concept then asked to add specific things.

When Valentine was asked about the compass, he was quick to point out the compass has a diameter of 10.5cm.  This would be an odd thing to know off hand especially when you are giving the artist concepts or general instructions.

Several of the clues demand the use of “the game measure” which tells us there is a set distance used as a measurement through out the game.  If the diameter of the compass is exactly 10.5cm, then the perimeter would be 33cm which equates properly with the future enigmas.

Max made a couple of comments about this enigma as well.  He said,” this clue gives an important thing.” He also felt it important to point out we are viewing the compass in the pedestrians hand, as if to point out we must go south from Bourges.

It is a near certainty this clue gives us the game measure of 33cm but everything else is widely debated.

The illustration also suggests we will first head south then, once completed, come back north which makes sense in the following enigmas.

Given there are only 11 clues and the first two we are 99% we have them correct, clue 3 will mark the first cross road.  The beginning is always the most important part.  If we miss something early on, we will end up 100 miles from the owl without a chance of locating it.  We will likely revisit this clue more than any other.

Whats in the Bag?

Clue 2: To find my all, just to be wise,
Because the Truth, in truth, will not be a Devin’s affair.

Clue 3: Is there something important we must learn at out southern destination?