When approaching Forrest Fenn’s poem, the question became how to make an ambiguous poem unique to locations. We too sat on the banks of the Shoshone River thinking if the correct answers to the clues were like these, the treasure could be anywhere.  We also asked ourselves, why would it take 15-20 years to write a poem if this was how we were to all solve it.  The only way it would seem the clues would be unique is if the words had multiple meanings that all pointed to one location.

We also thought that if we did identify one of the clues correctly, we would likely not be 100% certain.  That it would take the correct string of clues to feel like there was any legitimate traction. It seemed likely that the nine clues would be locations and the rest would either be meant to describe the clues or instruct an action.

While there are many details, layers, and associated aberrations to the clues, below is the basic info in the order we believe Forrest thought the clues would be solved.

In order to make this clue unique, the entire sentence had to be used to identify a location.  There were two “Put ins” in the Rocky Mountains named after Brown.  Joe Brown Put In, North of Gardiner, was the most likely but this clue standing alone would not be enough. -Joe Brown Put In

The mention of Joseph Meek seemed odd.  If you have read Journal of a Trapper, Joe Meek is not talked about enough to get a mention unless it was part of the design of the hunt. Just 3.6 miles down river from Joe Brown Put In, Joe Meek  was attacked by Indians where Tom Miner Creek spills into the Yellowstone River.  If we put in below, then we go down river from Joe Brown Put In.  -Tom Miner Creek

Clue 2- And take it in the canyon down- Black Canyon

With good solutions to clue 3 and 4, we look up river to find black canyon.

Clue 3 told us to “Put in.” If we are to follow the poem exactly, this would mean the route to the treasure must be waterways since we are never instructed to “take out.” 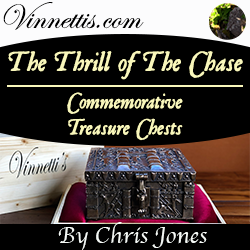 Clue 5- The end is ever drawing nigh-  Horse Creek

If we take this clue and apply its multiple meanings, the final location is near and not only  left but continuously left (ever) meaning every turn we make should be left to the final location.  The word nigh is often used by horseman referring to the left side of a horse.  By turning left on Tom Miner Creek and following the waterway, we find Horse creek on the left coming from a boxed canyon.

This clue raised an unforeseen issue.  Horse creek runs straight through a ranch owned by Paul Orfalea (Kinko, the guy who started Kinko’s then sold to Fed Ex), before you get to forestry land without any other way to access.  The Ranch Foreman was quick to tell anyone NO if someone asked to cross the property. While crossing the land using the waterways was legal, the land owners had let the vegetation grow together densely making it difficult to navigate.

Clue 6-There’ll be no paddle up your creek, Just heavy loads and water high

Once past private property and on Forestry land, following the creek we passed several oddly situated boulders the size of a semi truck standing alone in the forrest without justifiable means of origin.  2/3 of the way up the canyon we run into a large waterfall hidden in the forrest not on any map and not seen from google earth.

Naturally, we looked around for a blaze to no avail.  Everything could be a blaze if we wanted it to.  We were looking for Forrest’s blaze and needed clue 1.

The phrase “warm waters halt” is a fishing term often used to regulate fishing waters which was why so many believed the treasure was in New Mexico.  But Yellowstone National Park passed its own fishing regulations in the 1950’s.  This meant you could not fish for trout in the Yellowstone river with in the parks borders.

Identifying the location WWWH was part of it, but we had to learn how it applied to locating the blaze.  The Yellowstone National parks border along the Yellowstone River is known as Crevice Gulch.  It consists of Crevice Lake and Crevice creek with nothing else in the vicinity.

Our boxed canyon on Horse creek had only 4 significant features.  A lake at the top of Star Bright Mountain, a spring that fed the creek, the water fall, and a large crevice on the left side of the canyon.

We came to learn the most important part of this clue was, if we have been wise.  We couldn’t be wise.  There was something we had to figure out ahead of time. ” There are a billion blazes out there.”f   And…how could we go with confidence.

What we realized is if there are a billion blazes out there, it would seem Forrest would have to designate the correct one.  We turned to page 99.  Though not a “map” and not drawn by Forrest, the top illustration had the same geographic features as the large crevice in the canyon.  We deemed it plausible the arrow could have simply been added into the illustration.

After using a magnifying glass on the upper image, we could see that an arrow was purposefully draw when not needed in the raised rock.  While interesting, it wasn’t anything solid until we did the same thing to the crevice on google earth and found the arrow made from rock at the top of the crevice.

Once there we found that same raised rock on page 99 resembled the middle of a Marvel logo.  If we were to tarry scant with marvel gaze,  then we were to stand at the rock and look down into the crevice like the arrow on page 99.

Clue 9- If you are brave and in the wood

In the lower image on page 99, up against the wall, behind the gun, we saw a square box just below the bush with what looks like an H or a ladder next to it. When looking at the image as a whole, the box seemed to have no purpose along with the bush above it that did not match the other vegetation. Again, it we deemed it plausible that these features could have been added and Forrest still be able to say he didn’t draw the illustrations.

If we have to be brave and in the wood, we would have to go in the crevice, get close to the edge, and look under the bush.

In the very back of the ranch, there was a cabin built in the 1930’s that has been passed down through generations.  It is on 2 acres landlocked from the road and is oddly a match to the cabin on page 126-27 in TFTW.  It would seem Forrest would have had to park there to make 2 trips in one afternoon.  Parking there takes over 2.6 miles off the distance.

Grizzly Creek Ranch, Owned by Kinko, could be rented out for 30K per week.  The small cabin in the back was separate and could not be rented.